To kick off 2020 I am talking to Simon Sinek, who is best known for popularizing the concept of “why” in his 2009 TED talk. To date, it is the third most-watched talk at TED.com with over 40 million views. Simon is the author of several best-selling books, including “Start With Why,” “Leaders Eat Last,” and “The Infinite Game,” which was released in October of 2019.

For those who are long-time listeners to this podcast, my first question may surprise you. Instead of my usual beginning, I asked Simon one simple thing: What is your “why”?

“My ‘why’ is to inspire people to do the things that inspire them, so together each of us change our world for the better.”

There really was no other way to begin the conversation. Simon has been speaking about the importance of “why” since 2005, when he “fell out of love” with his marketing career and began speaking publicly about the importance of “why” to friends, and eventually friends-of-friends. The organic growth of his ideas eventually caught the attention of the US Air Force, and by mid-2006 he was invited to speak at the Pentagon and military bases across the US.

Simon has continued to be influential in the world of leadership, and I have personally been a fan for a long time.  He’s taken the concept of “why” even further, encouraging everyone to find a “just cause,” even if it’s from the vision of someone else.

“[O]nly two percent of the world’s population are visionary. Not everyone is, you know, Elon Musk or Richard Branson. But you get to find a vision. You have to find a vision. So maybe it’s a vision that somebody else articulated that inspires you, that you want to commit your energy and your work and your company to help advance. Whatever it is and wherever it comes from, you have to be able to state it with words.”

“Remember ‘why’ comes from the past, it’s the foundation. But a just cause is the future. It’s where you’re going.”

So, where is Simon Sinek going? As he strives to inspire others and change the world, his latest focus has been on helping others play the “infinite game as opposed to a “finite game.” When we look at the world through the lens of winning or losing, we’re thinking in terms of a finite game, where there are rules and a clear ending. But the work we do—from building companies to developing ourselves—don’t have a clear “winner” or “loser,” or final end date. 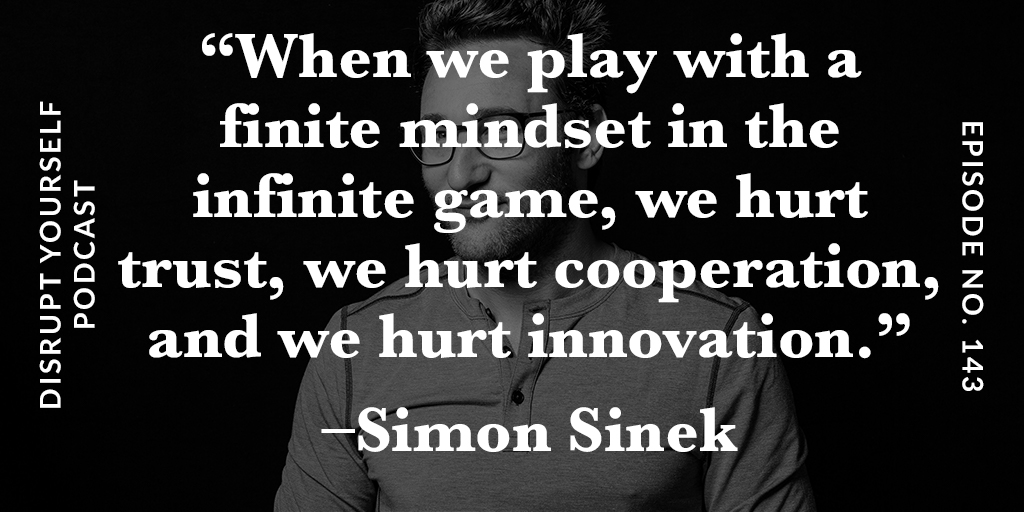 “[T]he problem is, is when we play with a finite mindset in the infinite game, we hurt trust, we hurt cooperation, and we hurt innovation. So we have to play for the game we’re actually in and in business, business is an infinite game. There is no finish line.”

Join us as we discuss how to shift your mindset from finite to infinite, the role of worthy rivals, and how becoming the leader you wish you had can change the future of a company.

Listen to the episode in the player above, or download and enjoy it on iTunes. If you’re so inclined, please leave us a review!

Takeaways from this episode:

Links Mentioned in this Episode: